The UK's No.1 Chrysler Owners Forum

5 replies to this topic

I have a leak in the air intake system after the turbo, causing an almost total loss of boost. I first went under the car and found a significant amount of oil coming from just after the turbo, in what felt like a split where a short metal tube joins the turbo output. It seems like it's held on by one small bracket, which it hinges around. I've attached a diagram indicating the part. Does anyone know what that part is, and if it's supposed to be mounted like that? It definitely doesn't feel very solid. Split indicated in red.

I then found what I think is the actual air leak, just under the inlet manifold. There is a lot of black gunk built up around it. I can feel the air coming out from under it, however I can't see it. It looks like to find it exactly I would have to remove the grill, radiator, and possibly the manifold itself. That's a fair bit of work just to put it all back together again. Has anyone else encountered this issue before, or have an idea about what might be causing this?

The air can be felt somewhere around the flexible hose coming upwards, but I can't find exactly where.

Thanks in advance for any help or advice that anyone can offer. 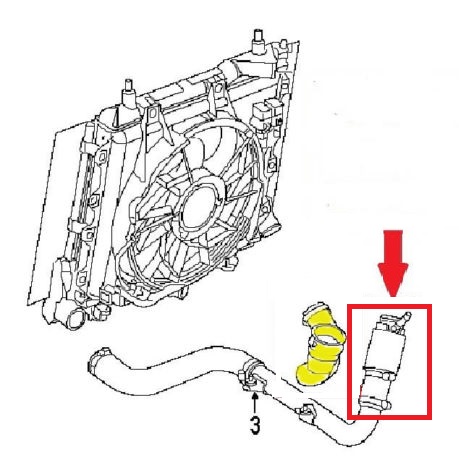 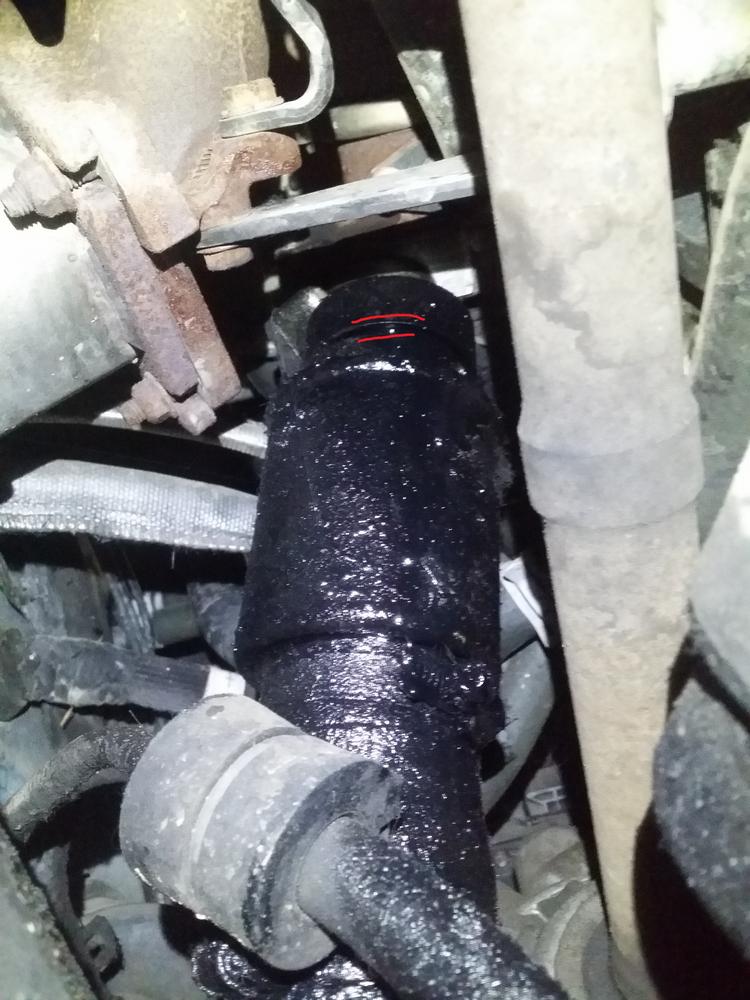 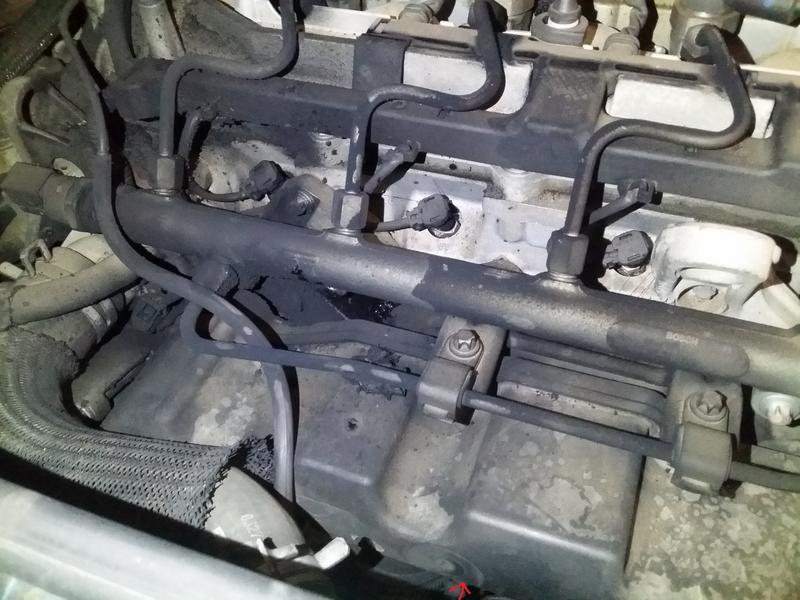 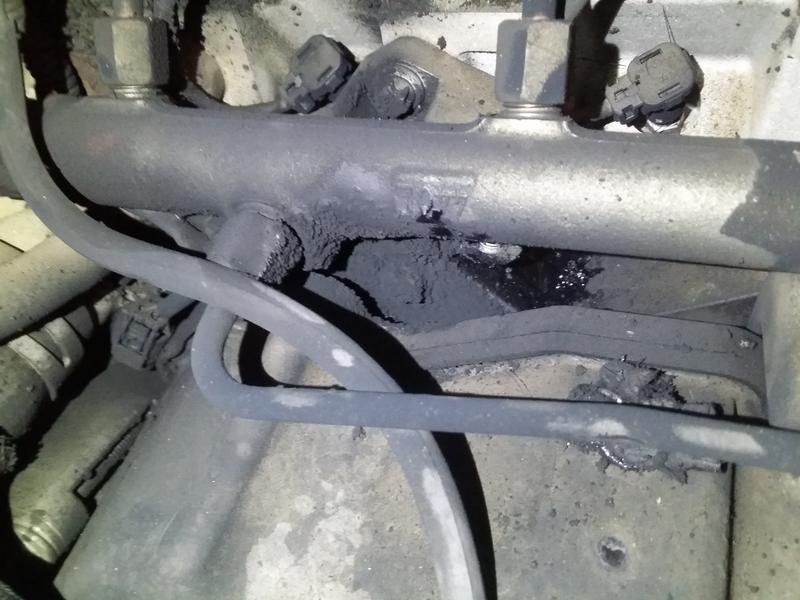 Sorry for all the posts, it decided that the single whole message was spam for some reason!

Do you have an engine warning light? I have the same issue and there is a 6 inch hose that is known as a week point, mine has a split in it of about 1 inch and after about 1.5 miles it won't rev over 3k rpm.

There is a thing called a "Key" shuffle that you can do on you PT cruiser to display error codes.

I get P0243. Something about the waist gate servo but I have replaced that to no avail (£180 odd quid)

After a lot of searching, swearing and scratching of head I found a link to here -> http://www.ptcompany...enance6.htm#dih(hope this is ok as this is my first post here).

I'll be putting my new one on in the next couple of days and seeing if it fixed it...  I'll let you know.

Thanks for the reply. I'd come to the conclusion that that hose was the most probable cause for the leak. It looks like a bit of a pain to get to, so I've bought a new one already. I figured by the time I'd taken the old one out I'd rather just fit a new one and not worry about it. I got one from eBay for about £50. Someone else has the car at the moment, but once I get it back I'll fit the hose and see if that does the trick.

There is an engine light intermittently, usually after trying to accelerate heavily. I scanned the car using a code reader but it gave me some codes in a different format. PXXAX, something like that. The main code was referenced in a couple of threads where people said boost leaks were the likely cause, which fits symptoms.

I'll let you know how it goes if I manage to fit mine before you do yours!

I've finally replaced the pipe. It had a 2 inch ling split on the rear side.

I've read that you are supposed to be able to bend the pipe in order to fit without removing the inlet manifold, however I couldn't do this at all. The replacement pipe especially was very thick, no chance to bend it even when it was warmed up. I wasted a lot of time trying to work around the radiators etc. In the end I just took them out. I'd much rather pay for an air con recharge than spend several hours getting covered in oily filth!

Below is a picture with the inlet manifold removed. There was a huge amount of oily carbon crud in the manifold. In the end I had to use a pressure washer to get it cleaned up. I ended up with a lump bigger than my fist. It's extremely hard to clean off your skin, so wear gloves. Also protective glasses if pressure washing anything.

If anyone else is going to do this, I would start by taking out the radiators, then remove the inlet manifold. I also dropped the metal pipe that the bottom of the replacement pipe connects to by a few inches to make things easier. It's a good opportunity to get everything cleaned up. Inlet manifold, swirl flaps, EGR valve and pipe, and coolant system.

Unfortunately I didn't have a set of the rubber seals that sit between the inlet manifold and the engine block as I didn't know I would end up removing it, but I would highly recommend ordering a set of them as well and replacing. All in you're probably looking at about 4-5 hours of work start to finish, depending how much cleaning you want to do.

There is one bolt on the inlet manifold that is a bit of a pain to get to. The bottom left one. It's tucked behind the alternator. Best to get at it with an 8mm rachet spanner, fed in behind the rubber pipe to be replaced. Most of the bolts you'll be removing have torx heads, E10 and E12 I think they were.

A kit that fits a 3/8 socket is best as they are fairly narrow. Also a couple of fairly short 3/8 extensions will help a lot.

The lower connection to the air con condensor is a bit annoying to get access to. a 13mm narrow socket should do it. I had to hold the radiator up a little from the normal resting place in order to get on it. Since the pipes are coming off anyway, it's probably a lot easier to detach that pipe at the other end, on the left side of the engine bay. Then remove the pipe with the radiator.

I hope that helps! Make sure you wear old/work clothes, the black crud that was coating the engine won't come out of anything. 3 days later and several rounds with some swarfega and a scrubbing brush and it's still visible in the lines of my skin. I was wearing disposable gloves inside a pair of work gloves!

Back to Chrysler PT Cruiser

Also tagged with one or more of these keywords: turbo, boost, leak

0 user(s) are reading this topic